NYMBO were last at Sawley village hall 4 years ago so the challenge was to produce a different version of what I considered at the time to be an ideal course. The map area used was shrunk slightly with almost all control sites different.  I split the area into 4 quadrants with 7 or 8 controls in each; the nearest SW & SE sections had 115 & 130 points respectively in each, NW & NE sections further away were worth 145 & 135 points.  The northern controls generally had faster minor roads and tracks to link them up whilst the southern half contained more bridleways for route choice.  Despite the drizzle during the event, the off road tracks would be nearly all firm underfoot, due to the longish dry period in September.

Examining the results, it was pleasing to see that there was no unanimity of route choice, although most leading riders set off in a SE direction before heading around the area in a clockwise or anti-clockwise direction.  Male winner Andy Conn was successful due to his riding speed but also because he judiciously missed out 5 point controls which would have cost time for little reward.  Also in M40 and second overall was Al Powell  who had a 40 minute/ 15 km chase back to the finish from his penultimate control, only picking up 15 points on the way.  Easy winner of the female class and W50 Angela Brand Barker  took a radically different route by heading west initially and then clockwise.  W40 and second lady Sue Booth was also faced with a 34 minute/9km chase back having chosen to ride 4km away from the finish to collect a 30 pointer at her penultimate control; her brave decision resulted in the loss of only 4 penalties.

I hope that you all enjoyed the event, I know that some riders suffered from thorn punctures but it is the time of year when farmers slash the hedges (there were none to be seen when I planned the course). My personal solution is to use slime filled tubes which seems to do the trick. A few riders told me that the map was wrong around control 25; apart from trees that had grown around the farm buildings everything seems spot on to me, the bridleway from the control to the road at the west had been cut with a machine that harvested the heather so if you were not on that surface, you were in the wrong place!

The entries may have been the biggest NYMBO turnout of the year, at one time we thought that the maps would run out but we just made it; thanks for those pairs who only took one map to help. Thanks also to control collectors Will & Sammy Wilson, Andrew Windrum and fellow planner, Roz Bardon, all controls were safely retrieved before night fell. 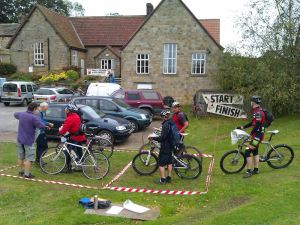 David Day planned a great course and the splits make interesting reading. It was a large area so no-one was going to clear up. However, there were some excellent scores but also some very heavy penalties. As the start was in the middle of the map there was a huge variety of routes chosen. I headed northeast and only saw 4 other riders in the first 2 hours but then met everyone heading the other way around #15 and #25. I rode 66k but there was probably too much distance between controls to the north to get the points needed to beat John Dixon.

Thanks to Jens for another excellent map and the helpers who helped to make everything run smoothly. Special thanks to Dave & Sue who were running SI for the last time as they want to ride next year. I will be taking the entries but if anyone wants to help at registration or download please let me know.

The splits are on the new NYMBO web page written by Dave Robertson and the basic results are on the BMBO site but you can also follow us and add your own comments on Facebook and Twitter.

Congratulations to the winners on the day who all received prizes as it was the last event in the National Series. Andy Conn led the way again with an impressive score. Timothy Martin won M21 and beat his Dad’s winning M50 score while John Dixon got it right to win M60. Angela Brand-Barker won W50 and was the overall women’s winner. Ralph & Chris Defty won the battle of the Mixed pairs with Steve & Andrea having a mechanical problem. Impressive scoring from Martin & Max Vesty to win the Generation class and Sam Wilson was the clear Youth winner.

Trophies were also awarded to the National League winners but, with so few counting riders, a few of the trophies weren’t contested. We need to think about the future and I am sure the committee would appreciate your opinions. They would also appreciate volunteers to replace the 3 officials who are standing down at theAGM.

Prizes were also awarded to the NYMBO League winners. Thanks to Tony Harker of Muddybums who sponsored the end of season T-shirts and to Halfords of Northallerton who provided the prizes at a vastly reduced price. I will write a separate article about the League once John Dixon has had chance to send me the final version. I will also write a summary of the 2012 season with thoughts about next year.

Finally, a great big thanks to the 9 volunteers who planned the courses this year.

The next NYMBO event will be at The Buck Inn, Thornton Watlass near Masham on Saturday 12th November. You can enter online or send an email to me at nymboevents@btinternet.com

Please let me know if there are any errors in the results, any links that don’t work on the NYMBO page or you want your details removing from the mailing list.